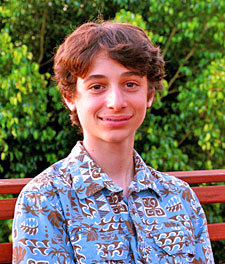 Mayor Alan Arakawa today announced that the documentary entry, “D.T. Fleming Arboretum,” by Maui County’s Elliott Wilson Cost of Kula, was among 14 winners in the 2006 Sister Cities International Showcase of Young Artists.
The competition was organized by Sister Cities International and designed for youth ages 13-18. This year’s 14 honorees hail from around the globe and were chosen from among 87 entries to artistically interpret the theme: “What does global citizenship look like?”
Fourteen-year old Cost’s winning DVD documentary – entitled, “D.T. Fleming Arboretum” – recognizes the work of Martha Vockrodt’s efforts to save the rare “alani” tree from extinction. “She truly demonstrates how one person can benefit our planet through global citizenship,” said Cost. Vockrodt’s grandfather, D.T. Fleming, planted an arboretum for native Hawaiians.
“In this time of war and poverty, and bigotry we are encouraged that these young artists from our sister cities are calling for peace and diplomacy through their art,” said Mayor Arakawa, “and entries such as Elliot’s represent visions of hope and encouragement for our future. We so pleased that there was a submission also from our sister city, the Municipality of Sarrat in the Philippines and, of course, completely thrilled when we were informed that Maui’s own Elliot Wilson Cost had won!”.
Cost purchased his first video camera at the age of ten by selling avocados. Soon after, his family took a trip on a boat through the inside passage of Alaska, during which he began his career behind the camera; the professional onboard videographer was taken by Elliott’s curiosity and enthusiasm for film and invited him to help out with the video he was creating for the passengers. Elliott’s name was listed in the credits and he was hooked.
Elliott’s love for filmmaking turned out to be more than just a passing phase. He has become a certified producer with Akaku, a local public access television station where he has volunteered for the past two summers. Additionally, Elliott has attended three summer programs to advance his knowledge of film: the first on Maui, the second at Pepperdine University and, most recently, the Advanced Young Filmmaker’s Workshop at Rockport College in Maine. Elliott has received much recognition for his video work. He was awarded an honorable mention for his piece for the Save Makena Video Contest in 2004. He placed first in the Island Movie Contest with his “Culture of Education” video in 2005 as well as placing first in the “Health and Fitness Category” in both the 2005 and the 2006 Teen Video Awards Contest. He most recently won first place in Maui’s Sustainability Contest. Elliott, without a doubt, is ambitiously pursuing a career in film.
Elliott has been hired many times for his emerging video capability. He has videoed and edited weddings, a baby luau, a bar mitzvah, several conferences, and created a graduation video for the Maui County Fire Department’s recruit class. Elliott has also experimented with the writing and creating of storyline films. He collaborated with his friend Shan Liljestrand and wrote, filmed, acted, and edited a short horror film entitled, “The Wood.” It was selected and screened at the Louis Vuitton Student Showcase at the Doris Duke Theater in the summer of 2005. Click here to view award winning video by Elliot Cost. Elliott is the son of Jill and artist Curtis Wilson Cost.
Submitted entries were on display at Washington, D.C.’s historic Union Station in the beginning of July. Winning entries will begin a national tour on September 15 and will visit ten cities, beginning in Charles, Missouri.

A panel of judges evaluated the entries based on theme interpretation, composition and originality. Since 1988, the Showcase of Young Artists has encouraged youth from around the world to express the mission of Sister Cities International through artwork.